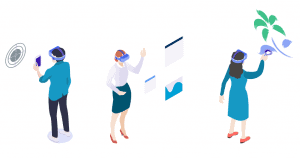 Virtual reality (VR) immerses the user in a 360 ° virtual 3D environment, using a computer-generated image application. It made its first appearance in the 90’s with its Oculus Rift headphones or the HTC Vive, which allowed true immersion. It was after a few years of testing that virtual reality arrived on the “mainstream” market.

Stimulating the senses like, sight, hearing or touch, virtual reality is today more developed in training than in the world of video games. We will thus see the 3 good reasons to choose VR for the training..

Virtual reality is necessarily accompanied by a helmet. This individual device already exposes the learner to an immersion process. It is with the help of the application linked to it this immersion, user’s experience will be even stronger. This is called “immersive learning”. The learner no longer needs to be in the field to analyze a problem, the solution comes to him. For example, in the industrial sector, a learner can simulate driving a machine to better understand how it works and reproduce it once in a real situation.

The learner is no longer just in a training room, he is suddenly facing his daily activities without being moved. This layer of reality and this almost total immersion allows you to learn in a very fun and realistic way. The errors are appropriated while training with this learning method, which is designed to prepare employees be fully operational when the time comes.

Interaction is the second good reason to choose VR for your training. The virtual world in which the learner is immersed reacts according to his actions. The power rests with the learner, he decides his path, his movements, his actions, he creates his own interactions. These interactions will result in the choices to be made. The individual has free will over his actions.

Interactivity can also be observed with other learners in virtual reality. It’s programming, so almost everything can be imagined. A recruitment interview, for example, can be done in VR. This will put two people in one context.

Something unique about this format is a very real motivation of the learner during training. As seen in the article “Immersion by the Serious Game”, managers put many concepts in place to stimulate the motivation of their learners. One factor that significantly increases motivation is novelty. We know that everything new is attractive. Here virtual reality to form a team can be confusing at the start, because very far from the so-called “classic” training methods, but once tested it is difficult to go back. Between purely theoretical training and training with practical training, which is the most motivating? If you are told that this is the moment when you have the right to make a mistake without having any impact? If you could carry out for the first time a manoeuvre which seemed dangerous to you? What if in virtual reality you could get over the fear of public speaking? If all this were possible, would that be motivating for you?

We think we know the answer!

So when is your first step in a virtual world?